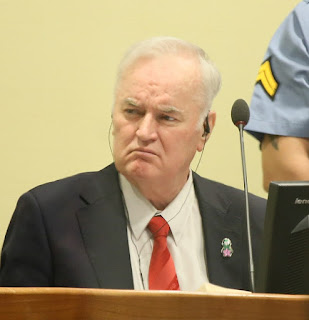 Ratko Mladić, the former Bosnian Serb commander nicknamed the “butcher of Bosnia”, will spend the rest of his life in prison after a UN court dismissed his final appeal against convictions for genocide and crimes against humanity, in a judgment hailed as “historic” by the White House.

Unlike previous appearances at the international criminal tribunal for the former Yugoslavia (ICTY) in The Hague, the 78-year-old showed little emotion as an hour-long reading of the judgment finally put an end to attempts to quash the charges against him.

Wearing a black suit and a sky blue tie, Mladić scowled, sat back in his chair and rested his chin on his hand as he listened to the rejection of each of his appeals against 10 convictions involving extermination, forcible transfers, terror, hostage-taking and unlawful attacks on civilians. He was the only person in court not wearing a mask.

For the final comments of the presiding judge, Prisca Matimba Nyambe, Mladić stood and bowed his head, flanked by two guards. The appeal had been dismissed “in its entirety” and his life sentence was affirmed, she told him.

Mladić’s only words during the hearing were to respond “Yes, I can” when asked whether he was able to follow the proceedings. There was the odd shake of the head, but Mladić’s behaviour stood in sharp contrast to his final appearance during the original 2017 conviction, where he had shouted “this is all lies” and “I’ll fuck your mother”, while gesticulating at the relatives of his victims.

Shortly after the judgment was delivered, Joe Biden described it as a moment of hope.

“This historic judgment shows that those who commit horrific crimes will be held accountable,” the US president said. “It also reinforces our shared resolve to prevent future atrocities from occurring anywhere in the world.

“My thoughts today are with all the surviving families of the many victims of Mladić’s atrocities. We can never erase the tragedy of their deaths, but I hope today’s judgment provides some solace to all those who are grieving.”

Mladić will now join his one-time political master, the former Bosnian Serb president Radovan Karadžić, in serving a life sentence as a key architect of the ethnic cleansing and civil war that followed the break-up of Yugoslavia in the early 1990s.

The appeal chamber’s judgment was marred for the survivors and relatives of victims gathered outside the court only by the decision of Nyambe, a judge from Zambia, to dissent from the majority decision of the chamber’s five judges to reject a range of Mladić’s claims for dismissal.

Munira Subašić’s husband, Hilmo, and 17-year-old son, Nermin, were killed in the Srebrenica genocide. She lost 22 members of her extended family and is now the head of the organisation Mothers of Srebrenica.

“Personally, I believe that justice has won, although as victims of course we are never completely satisfied,” Subašić said after the ruling. “This victory is not only for us but for all the mothers of Bosnia and Herzegovina whether they be Serb, Bosniak [Bosnian Muslims] or Croatian. Every mother suffers.”

Asked about Nyambe’s dissents, she said: “I simply believe that women are here to give birth, to create and to make the world a better place. But today, I witnessed the words of a woman – I don’t know whether she’s a mother or not – who had so many dissenting opinions, despite the fact that the whole world knows what happened there. So, I felt a bit antagonistic, asking myself whether it was possible for a woman to show that lack of understanding.”

The court rejected the prosecution’s attempt to add a second conviction of genocide to Mladić’s crimes relating to alleged offences in specific municipalities of Bosnia and Herzegovina, where there was said to be reasonable doubt over intent.

The judgment was final, however, that the former Serb commander, who had been on the run for over a decade before justice caught up with him in 2011, did play a leading role in the attempts to permanently remove Bosnian Muslims and Bosnian Croats from Bosnia and Herzegovina between May 1992 and November 1995 by spreading terror among the civilian population through sniping and shelling.

He was part of a criminal enterprise that sought to eliminate Bosnian Muslims in Srebrenica, in Europe’s first genocide since the second world war, the court said. Between 11 July 1995 and “at least” October 1995, his intention had been to kill men and boys and forcibly remove the women, young children and some elderly men.

Some 8,000 people died, most of them having been taken away in buses, lined up and shot, with their bodies dumped in mass graves. During the original trial, the prosecution had shown video footage of Mladić at the scene while men and boys were separated from their families. It was under Mladić’s command that UN personnel were taken hostage and put in strategic military locations to prevent Nato from launching airstrikes, the appeals chamber added.

“It’s a final judgment and of course it is extremely important, because he really symbolises more than everyone else, the war crimes committed, the hatred, the human suffering,” said Serge Brammertz, the former chief prosecutor at The Hague war crimes tribunal, who oversaw the capture of Mladić after 14 years on the run, and his prosecution. “It is definitely a very important moment for the tribunal for my team, but even more for survivors and victims.”

Brammertz, now chief prosecutor at the UN’s International Residual Mechanism for Criminal Tribunals, said he had expected Judge Nyambe’s dissenting opinions given her views expressed in earlier cases. But he added: “What is important today is that the large majority of judges upheld all convictions of the first instance and rejected in its entirety, the appeal by the defence.”

Mladić’s name “should be consigned to the list of history’s most depraved and barbarous figures”, he said.