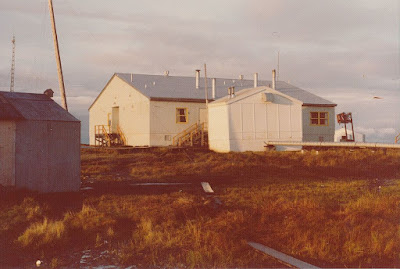 Two years ago, Lisa Charles and her family moved from their lifelong home in the town of Newtok, Alaska, to Mertarvik, a 30-minute trip by boat or snow machine depending on the season.

Lisa is a member of one of the US’s first communities of climate transplants, though she is also Yup’ik, a mother of seven, a nonprofit employee, and a political volunteer. Melting permafrost has rapidly accelerated the erosion of the land under Newtok, bringing houses precariously close to the water’s edge.

All of the town’s nearly 400 residents will eventually have to make the move to Mertarvik, but a lack of funding and the global pandemic have left the village split in half, both in population and in spirit.

“I think of Newtok as a little island, as swampy ground,” says Lisa. “The ground has gotten so bad that all the light poles are leaning over, the boardwalks are getting crooked and breaking apart.

Lisa’s uncle, Teddy Tom, finally got to move to Mertarvik six months ago after two floods brought water under his house. Before he left, he took a final photo of his late parents’ home as it was demolished. It was once miles back from the Ninglick River, but by 2020, the house risked falling into the water. The land where Teddy grew up no longer exists, and he says the village grows warmer every year.

As a result of global warming, the arctic permafrost is thawing more quickly than expected, causing building foundations to deteriorate. For communities like Newtok along a river or coast, climate change can also accelerate erosion. In some years, more than 100ft of Newtok’s coast has broken away into the encroaching water, and in 2004, the US Army Corps of Engineers predicted that Newtok would be completely lost by 2019.

For young people growing up there, moving was always a possibility. Ashley Tom, Lisa Charles’s daughter, says the thought of migrating “kind of ruined my childhood”. Ashley, a freshman in college taking virtual classes from Mertarvik, studies tribal management with the intention of returning to work on Newtok’s village council.

“It was sad having to leave our old house because I grew up in that house; I have a lot of memories,” Ashley told the Guardian. “It’s just a blessing to be in a better environment compared to Newtok, and I feel more safe over here since we’re on higher ground.”

But as a child, rather than thinking about the months for moose hunting or fishing, Ashley measured her early years according to “erosion season” in autumn and spring. “Every time it gets windy out and rainy, that’s when we know we’re going to lose land.”

The relocation project was dogged for more than 20 years by a lack of resources and governmental support. Construction is expensive in rural Alaska, where supplies have to be flown in and gasoline costs $5.68 per gallon (£4.02). To Lisa and Ashley, officials have not taken the slow burn of global warming seriously enough.

“We hear these top people in power not thinking climate change is real just because where they live, they’re not seeing the effects right away,” says Lisa. “Where we live, it’s impacting us really fast. We can see that it’s real, it’s bad, it’s hurting our environment.”

Beyond the threat from flooding and erosion, climate change is also disrupting fundamental ways of life in Alaska’s indigenous communities. In Newtok, Lisa says the cost of living is so high that everyone depends on seasonal subsistence. From berry picking in the summer to moose, seal, and beluga hunting during the colder months, Newtok’s residents have long relied on south-western Alaska’s ecosystem. “I think being outdoors in the wilderness is like therapy,” Lisa says.

But now, in response to a changing planet, the river does not freeze over when it used to, storms flood Newtok’s homes, and oil projects endanger the nearby salmon habitat. In Mertarvik, residents have found a healthier environment, relying even more on subsistence when the general store is sparsely stocked.

Climate change is not the only reason Newtok’s Yup’ik residents have been forced to change their way of life. In the mid-20th century, people like Teddy Tom’s parents used boats and dogsleds to migrate seasonally between the Ninglick River and the Bering Sea. But in 1949 when the state decided to build a school for the community, they chose Newtok three miles south of the original village because the supply barge could not get any farther upriver. The town sprang up around the school.

For now, life in Mertarvik is taking some getting used to. The town is missing certain infrastructure, like an airport and a full clinic. Lisa says Covid-19 vaccines initially could not be distributed, and it took months to obtain vaccinations for her infant daughter. “There’s supposed to be monthly public meetings and annual shareholder meetings,” says Lisa. “Because of Covid, they’re having a hard time.”

But Mertarvik is an escape from the dangers of erosion, from floodwaters and polluted sewage dumped into the river. For people like Carolyn George who remain in Newtok, many are eager to be in the next round of migration.

There have been disputes over who should be moving and over how Newtok’s allocation from the Coronavirus Aid, Relief, and Economic Security (Cares) Act should have been spent. The majority went towards construction in Mertarvik, but shipping delays meant that nine new houses remained incomplete at the start of the Alaskan winter.

Community members received assistance with electricity, heating fuel, and groceries around the end of April, but Lisa says the tribe was supposed to distribute aid in December. She adds that this year, Newtok will have no native dancing festivals or basketball tournaments, leaving residents unable to socialise.

This hits close to home for Carolyn George, whose parents live in Mertarvik. After the village’s first and only positive Covid-19 case appeared in January, George could no longer visit her family. “I miss them so much,” she says.

The global pandemic has strained Newtok’s relocation effort. But the pace of erosion and global warming stays the same. As Newtok slowly disappears, residents remain on a decades-long journey to cross the river.