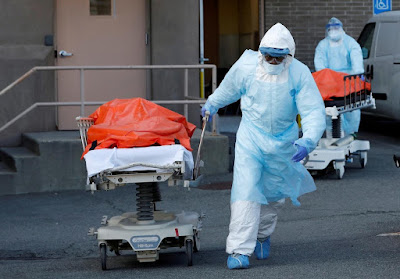 India’s daily tally of coronavirus deaths has reached more than 6,000 after a single state dramatically revised its data for fatalities during the second wave, increasing fears that the country’s toll is much higher than reported.

While the daily total would be a global record for a single day, it appears that Bihar’s addition of approximately 4,000 extra deaths after a court challenge accounts for deaths that occurred throughout India’s devastating second wave of infections.

The new total comes as official figures for nationwide infections in India showed a third day under 100,000, suggesting the latest surge may be declining.

According to health ministry figures, 6,148 people died in the previous 24 hours, taking total fatalities to almost 360,000, the world’s third highest. The previous world record, according to an AFP tally, was 5,527 in the US on 12 February, although this was also because of an upwards revision of earlier deaths.

The revision came amid allegations that the state of Bihar had undercounted its death toll, which had led the high court in Patna to order a detailed audit that now includes those who died from Covid complications after recovering from the disease, and also those who died on the way to the hospital.

Similar accusations have been levelled at other state governments after a recent coronavirus surge resulted in crematoriums being overwhelmed in many places and hundreds of bodies being dumped in rivers or buried in shallow graves.

With record-keeping poor even in normal times, many experts believe India’s death toll is several times higher than the official number, meaning it could be more than a million, which would make it the world’s highest.

The newly reported deaths had occurred last month and state officials were investigating the lapse, a district health official said, blaming the oversight on private hospitals. “These deaths occurred 15 days ago and were only uploaded now in the government portal. Action will be taken against some of the private hospitals,” said the official, who declined to be identified as he was not authorised to speak to the media.

Suspicions have been heightened by the fact that death rates in many countries, for example in Brazil and the US, are several times higher than in India.

While India’s official Covid-19 death toll stands at 359,676, C-Voter, an Indian research and polling agency, estimated last month that at least 1.8 million Indians may have died from Covid-19. If these numbers are accurate, it would mean that India has been by far the worst-hit country.

“Under-reporting is a widespread problem, not necessarily deliberate, often because of inadequacies,” said Rajib Dasgupta, head of the Centre of Social Medicine and Community Health at New Delhi’s Jawaharlal Nehru University. “In the rural context, whatever states may say or claim, testing is not simple, easy or accessible,” he said.

The government dismissed those estimates as exaggerated. But the main opposition Congress party said other states must follow Bihar’s example and conduct a review of deaths over the past two months. “This proves beyond a doubt government has been hiding Covid deaths,” said Shama Mohamed, a Congress spokesperson, adding that an audit should also be ordered in the big states of Uttar Pradesh, Madhya Pradesh and Gujarat.