It takes a wood to raise a tree 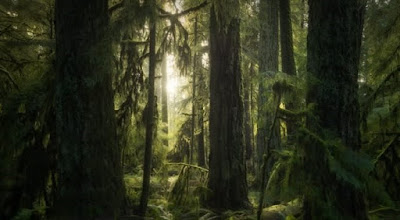 Growing up in the rainforests of the Pacific Northwest, I often grieved that their beauty — sky-high Douglas firs, rustling alders, sword ferns draped across the slopes — was born of a brutal battle for light, water and nutrients. So I thought.

In 1997, ecologist Suzanne Simard made the cover of Nature with the discovery of a subterranean lace of tree roots and fungal filaments, or hyphae, in British Columbia (S. Simard et al. Nature 388, 579–582; 1997). It was “a network as brilliant as a Persian rug”, she recalls in her memoir Finding the Mother Tree — a network through which multiple tree species were exchanging carbon. The trees were cooperating.

The discovery of this fungal network, or ‘wood wide web’, as it came to be known, upended a dominant scientific narrative — that competition is the primary force shaping forests. Forest ecology is instead a much more nuanced dance, in which species sometimes fight and sometimes get along. This calls into question the way that most foresters manage trees. Clear-cutting, weeding and planting single species in well-spaced rows makes sense only if trees do best when they have all the resources they need to themselves.

Throughout her career, Simard has shown that, in fact, it takes a whole ‘village’ to raise a tree. Alders fix atmospheric nitrogen, which can then be used by pines and other tree species. Older, deeper-rooted trees bring up water from lower in the soil to shallow-rooted plants. Carbon, water, nutrients and information about threats and conditions are shared across the fungal-root network. When Douglas firs are infested with western spruce budworm (Choristoneura occidentalis), they alert pines to which they are connected through the wood wide web, and these respond by producing defence enzymes. In the middle of all this activity are the mother trees. The oldest, largest and most experienced, they subsidize the growth and flourishing of seedlings all around.

Simard creates her own complex network in this memoir, by weaving the story of these discoveries with vignettes from her past. The themes of her research — cooperation, the legacies that one generation leaves for the next, the ways in which organisms react to and recover from stress and disease — are also themes in her own life. The network of friends, family and colleagues who support Simard, as a scientist and as a woman, is visible throughout: as central to the story as a forest’s web of fungal filaments and delicate rootlets.

Simard’s life story is, of course, unique, yet it has a striking universality. After working for a logging company, she moved into government service and then into academia, trying in each job to untangle the subterranean mysteries of the forest. She fought to have her ideas taken seriously in a male-dominated field. (There are shades of Lab Girl, by US geobiologist Hope Jahren, in her clear-eyed depictions of what she has to deal with behind the scenes — from being passed over for jobs for which she was the best candidate, to being called “Miss Birch” behind her back, a sound-alike for a much harsher epithet.) Simard found love, lost it, and found it again. She struggled, like so many scientists, to balance her research and her roles as a wife and mother. She faced mortality when diagnosed with cancer.

Moving through life’s highs and lows with her is rewarding because of these resonances, and because she comes across as the kind of person who usually doesn’t write memoirs — shy and occasionally fearful, always earnest. It feels like a privilege to be let into her life.

The muddy, stressful and occasionally exhilarating experience of fieldwork shines through. “Jittery with adrenaline”, while labelling seedlings in one field experiment, she describes feeling “as if I were about to parachute out of a plane, maybe land on Easter Island”. Simard got her first morsel of proof for her theory in 1993, while kneeling on the forest floor holding a Geiger counter to detect the radioactive carbon-14 that she used to track carbon flows through plants and fungi. “I was enraptured, focused, immersed, and the breeze sifting through the crowns of my little birches and firs and cedars seemed to lift me clear up,” she writes.

After publishing her Nature paper, Simard showed that trees direct more resources to their offspring than they do to unrelated seedlings. The finding suggests that trees maintain a level of control through the network that one might call intelligence. As she argues, plants seem to have agency. They perceive, relate and communicate, make decisions, learn and remember, she writes: “qualities we normally ascribe to sentience, wisdom”. For Simard, that implies that they are due a certain respect.

She does not spell out the ethical implications, but the ideas raise fascinating moral questions. What responsibilities do we owe plants? Is logging or farming crops, to harvest and eat, cruel? What kinds of legal right might a tree have if we base our theories of rights on whether individuals, such as humans and chimpanzees, have intelligence or sentience?

It is tempting to ascribe the dominance of the ‘brutal competition’ narrative to the fact that ecology was dominated by men, and to find poetic power in the idea that a woman saw cooperation when her male colleagues couldn’t. But Simard tells a more complex tale. She struggled to see the truth in the soil and in her heart — and got there only because she was determined and intuitive.

Simard writes that big old trees are “mothering their children” by sending them, through the forest network, sugars, water, nutrients and information about threats. Reading this on page 5, I was sceptical. By the end I was convinced. The beauty of the forests of my youth turns out to be shaped, in a sense, by love.