Netanyahu Is Out: Naftali Bennett Sworn In As Israel's New Prime Minister 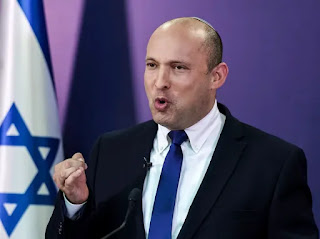 For the first time in more than a decade, Israel has welcomed a new prime minister. Naftali Bennett was sworn in on Sunday after a new coalition unseated longtime Israeli leader Benjamin Netanyahu.

The newly elected prime minister was appointed by the Knesset, Israel's parliament, in a 60-59 vote, with one minister abstaining.

Shortly after the votes were tallied, the now former-Prime Minister Netanyahu approached his opponent and the two shook hands. Not long after that, he took to Twitter, instructing his supporters to hold their heads high and keep the faith; vowing to return.

"I ask you: do not let your spirit fall," he said. "We'll be back - and faster than you think.