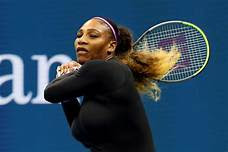 PARIS – Serena Williams turns 40 in September. Roger Federer hits that milestone the month before. No one knows how many more French Open appearances each will make, and this year’s tournament ended for both on Sunday.

Williams fell way behind and could not put together a comeback against a much younger and less-experienced opponent in the fourth round at Roland Garros, losing 6-3, 7-5 to Elena Rybakina — who wasn’t even born when the American made her tournament debut in 1998.

That defeat came hours after Federer withdrew, saying he needed to let his body recover ahead of Wimbledon after a long third-round victory that ended at nearly 1 a.m. on Sunday.

Williams has won 23 Grand Slam titles and Federer has won 20. They are two of the sport’s greatest and most popular players, so it was quite a blow to the tournament, its TV partners and tennis fans to see both gone from the field one after the other — and a week after Naomi Osaka pulled out, citing a need for a mental health break.

Williams has won the French Open three times. But the American hasn’t been past the fourth round in Paris since she was the runner-up in 2016.

Rybakina is a 21-year-old from Kazakhstan who is ranked 22nd. This was just the seventh Grand Slam appearance for Rybakina — and the first time she ever made it so much as past the second round.

Against Williams, whose right thigh carried a heavy tape job, Rybakina hit big, flat serves. She dealt with, but managed to steady, her nerves. She even produced the occasional return winner off Williams’ speedy and spectacularly gifted serve, breaking her five times, including in the next-to-last game.

“I am so happy with my match today. It was amazing,” Rybakina said. “Of course I was nervous. I was not serving that well before. But I’m just happy that I just managed.”

Williams was down 4-3 in the second set but pulled even again when Rybakina sailed a forehand well wide to get broken.

In the next game, Williams gave away the opening point when, near the baseline, she failed to get out of the way of a shot from Rybakina that was flying long.