What are the real demons behind acid rains and ozone holes? 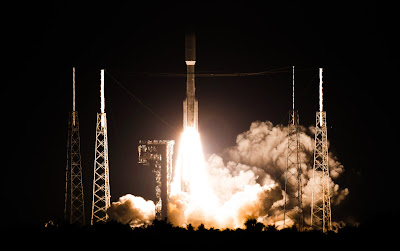 Solid rocket motors (SRMs) help many heavy-lift rockets off the ground. Most well known are possibly the solid rocket boosters of NASA's space shuttles, which burned a mixture of aluminum and ammonia, and were not exactly an environmental win.

Some rather strange occurrences were reported after space shuttle launches. The massive cloud generated during liftoff contained rather reactive chemicals such as hydrochloric acid and aluminum oxide. These substances got mixed up with water from the deluge system that cooled down the launch pad and the rocket. This cloud then spread in the surrounding environment, affecting soil and water quality, and damaging vegetation, according to the review.

After several space shuttle launches, large amounts of dead fish were found in nearby water bodies, a study cited in the review reported. Scientists then experimented with open, closed and partially closed buckets with water that were left near the launch site during liftoff. They found that as stuff from the space shuttle cloud rained into the buckets, the water inside turned into a mild acid. Fortunately, in nature, the water PH quickly returned to normal (although not quickly enough for the dead fish).

In the 1990s, scientists flew high-altitude planes through the space shuttle exhaust plumes. They wanted to know what the chlorine from the exhaust did to the ozone layer. They indeed found local ozone holes in the rocket's wake, David Fahey, the director of the Chemical Sciences Laboratory at the National Oceanic and Atmospheric Administration, who led the research, told Space.com in an earlier interview. But the holes healed quickly after each launch and were not large enough to affect the ozone layer globally. At least not at the frequency of launches at that time.

But there are still other components of the SRM exhaust that scientists still don't fully understand and are concerned about. The aluminum oxide from the exhaust forms particles that might reflect sunlight and thus change how much heat reaches Earth's surface. These particles get injected into the otherwise pristine upper layers of Earth's atmosphere, the stratosphere and the mesosphere, and potentially trigger temperature changes.

Martin Ross, of the U.S. Aerospace Corporation, a leading expert on atmospheric effects of rocket launches, who was part of the ozone-measuring campaign in the 1990s, told that the team did measure aluminum oxide particles at that time but did not focus on how much they scatter or absorb light. At that time, the scientists were interested in the particles' contribution to ozone depletion.

The space shuttle may long be retired but SRMs are still in use, helping off the ground Europe's Ariane 5 as well as the upcoming Ariane 6 rocket, which are using liquid oxygen and liquid hydrogen as their main fuel. NASA will use longer versions of these polluting boosters to help propel its new Space Launch System megarocket for the upcoming Artemis moon missions.