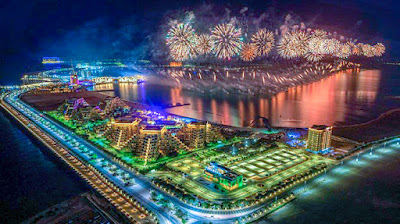 The “RAKNYE 2020” fireworks’ first Guinness World Record title was for the ‘Highest Altitude Multirotor/Drone Fireworks Display’ following the tower of fireworks 1,055.8 meters high, taller than any skyscraper in the world.

The 12-minute spectacle was choreographed to orchestral music and was also a tribute to the UAE as it continued to mark the 50th anniversary of the creation of the UAE.

The grand finale included a multi-color display of lights followed by a large expanse of white that illuminated the skyline of Ras Al-Khaimah with a message of hope and ambition.

“RAKNYE2022 is our tribute to the leadership and people of Ras Al-Khaimah and the UAE not only as we celebrate the 50th Anniversary of our nation but also in preparation for the Next 50 Years,” a spokesperson of the organizing committee said.

“With this event, we once again underlined the reputation of Ras Al-Khaimah as the leading tourism destination that welcomes visitors from across the world.”