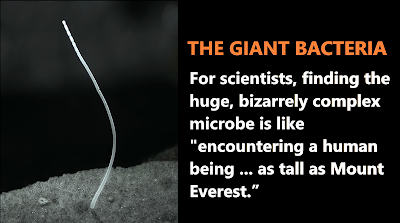 We usually think of bacteria as organisms so small they can be seen only through a microscope. But scientists discovered a giant white bacterium lurking on rotting leaves in the brackish waters of a red mangrove swamp in Guadeloupe in the Lesser Antilles.

It’s so large it can be seen easily with the naked eye. But size isn’t the only astonishing trait of this long, filamentous microbe; it has a more complex structure than any other bacterium previously discovered, and, unlike most, it stores its DNA in tidy little packets.

Previously discovered giant bacteria, some of which can also form centimeters-long filaments, are composed of hundreds to thousands of cells. But the newfound bacteria, which is roughly the shape and the size of an eyelash, is a single bacterial cell. “Realizing that a filamentous bacteria of that size is actually just a single bacterium was an aha moment,” says Jean-Marie Volland, a marine biologist at the Lawrence Berkeley National Laboratory who led the research, in an interview with National Geographic.

The scientists have named the microbe Thiomargarita magnifica for its size and the pearl-like beads of sulphur found inside the cell. T. magnifica is not only more than a thousand times bigger than a typical bacterium, it’s also longer than many multicellular animals such as fruit flies. In a news conference on Tuesday Vollard said that “Discovering this bacterium is like encountering a human being that will be as tall as Mount Everest.”

“The discovery of this new Thiomargarita bacterium makes us appreciate the incredible diversity of the microbial world, and the intricate structural and genomic adaptations of bacteria that allow them to grow towards cell sizes that nobody would have expected,” says Andreas Teske, a marine biologist at the University of North Carolina at Chapel Hill. Teske co-discovered the previous size record-holder, Thiomargarita namibiensis.

It’s a stunning illustration that bacteria are much more complex, organized, and versatile than we expect, says Chris Greening, a microbiologist at Monash University, Australia, who was not involved in the discovery. “Bacteria keep defying textbook descriptions of them.”

In 1999, Teske and other scientists discovered the strikingly large bacterium that they called Thiomargarita namibiensis, or the “Sulfur Pearl of Namibia.” Until now that bacterium—which grows as a string of white beads, occasionally reaching the size of three-fourths of a millimeter and is large enough to be visible to the naked eye—held the record for the largest bacterium. But the Caribbean bacterium is more than 50 times larger.

Petra Anne Levin, a microbiologist at Washington University in St. Louis, who was not involved in the discovery isn’t surprised by its size. “The main take-home message is that we shouldn't underestimate bacteria as simple organisms because that definition is outdated,” she says. “Bacteria are endlessly adaptable, and we should expect to see them in a wide variety of sizes.”

Bacteria belong to the branch of life called prokaryotes, which are the most basic living creatures. They are often described, though not accurately, as a bag of enzymes surrounded by a single membrane. What makes bacterial prokaryotic cells different from eukaryotic cells—which include animal, plant, and fungal cells—is that they don't have a nucleus, which is a separate compartment where the DNA is housed, explains Danny Ionescu, an aquatic microbiologist at The Leibniz Institute of Freshwater Ecology and Inland Fisheries in Germany. “There are many other functional physiological differences, but this is the one that makes them different than the eukaryotes, such as us.”

The newly discovered bacterium defies this definition because it packages its genetic material in compartments surrounded by membranes that resemble a primitive nucleus.

This newly characterized bacterium was first spotted by Olivier Gros, a mangrove biologist at the University of the French Antilles in Guadeloupe. “I spend a lot of time in the water looking at different things in the mangrove sediments. One time I saw these long white filaments, so I just collected them out of curiosity,” he says.

The scientists in Gros’s lab tried to characterize these filaments, which they originally thought were a fungus or some other multicellular organism. But their early analyses hinted that these microbes probably belonged to the family of giant Thiomargarita bacteria. “But we were not so confident about that,” Gros says.

Volland, who was a postdoctoral fellow in Gros’s lab joined Shailesh Date, founder and chief executive officer of the Laboratory for Research in Complex Systems in Menlo Park, to continue the quest to characterize this strange specimen. Date’s lab is a nonprofit corporation that partners with academic institutions for transdisciplinary research.

“It was very apparent right away to everyone that what we had was a big bacterium, and it was a single cell,” Date says. But the challenge was how to figure out what else was special about the microbe. Using a range of molecular biology techniques, Volland, Date, and colleagues created high-magnification, three-dimensional photographs of these long specimens. That allowed them to see every one of these super large cells that made up a filament.